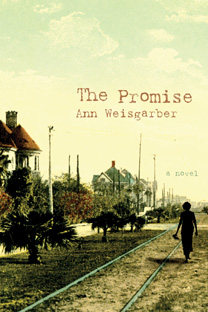 “The narration is split between Catherine and Nan, Weisgarber doing an admirable job in distinguishing between the two, the voice of each ringing out clearly. So, too, her description of the storm itself is wonderfully atmospheric, the fear of her protagonists mounting minute by minute, the tension as thick as the heavy Texan summer air. Combine this with heartbreaking historical details, such as an entire orphanage swept away by the sea, and you have the perfect ingredients for vintage historical fiction.” – Lucy Scholes (UK) The Independent

“This second engaging novel from Weisgarber….has shades of Willa Cather, Sinclair Lewis, and Conrad Richter, and the prose has a streak of formality that gives the book a period flavor, but Catherine’s first-person narration (and later that of Nan Ogden, the housekeeper at Catherine’s new home) is also appealingly immediate.  It’s a wonderful setup for solid storytelling…warm and winning.” – Publishers Weekly, Starred Review

“…. the story is nuanced, psychologically sensitive, detailed and highly visual. … moves at a rhythmic pace that constantly tugs at readers. The characters, setting and plot synchronize perfectly.  …the drama flows naturally from the story’s style …. brims with themes and conflicts that balance and deepen the novel — man vs. nature, the individual vs. society, struggles with honesty, and colliding religious beliefs and moral standards. …This is fiction from a gifted author who knows the territory.” – David Hendricks, San Antonio Express-News

“The characters are beautifully and honestly drawn, their flaws and failings only making them more vulnerable and human. But this “narrow bar of dirt and sand, water on all sides,” is as vital to the feel of this novel as the people, the salty air, the heavy Texan heat and the sounds of this weathered landscape. Weisgarber paints such a vivid description of the storm water which steals over this flat land that I was left wanting to shout out “Run for your lives!” You will not be able to put this book down and will be moved by this story of redemption and of promises kept.” –  Southern Reporter (Scotland)

“Based on the true story of one of the deadliest storms in American history, The Promise is the work of a skilled storyteller. Weisgarber (The Personal History of Rachel Dupree, 2010) has written a beautiful, deeply engaging story about love, loss, and the power of secrets to change our lives.” –  Booklist

“The story ….. is engrossing and the final pages are profoundly moving.” – Kirsty Wark, broadcast journalist and author of The Legacy of Elizabeth Pringle

“Never since the day Atlanta burned and Scarlett O’Hara was trying to escape with Rhett Butler at the reins from Gone With The Wind have I been more on the edge of my seat…. Plan to spend some time with this book as you will not put it down. It’s that good…  Ann Weisgarber has written yet another great one.” –  Kathy Murphy, Charm Magazine

“Excellent use of historical detail and strong character development …it wide should attract readership.” – Library Journal

“….Weisgarber is no ordinary novelist. A skilled writer, she transports us to 1900 Galveston…  Her breathless description of the storm’s aftermath delivers the best of what historical fiction has to offer — a personal rendering of an event that many of us cannot otherwise fathom. [Weisgarber] has delivered a second novel of finely drawn characters anchored by historical events. It’s the sort of tale that you find yourself staying up late at night to finish.”  – Karen M. Thomas, Dallas Morning News

“The depth of each character, particularly the two women that make up the focus of the story, is phenomenal. The author brings the reader right into the fears and motivations of each woman, and it makes for what is easily the best first-person narrative I’ve been fortunate enough to read. Not only are the characters detailed, but so is the setting. Weisgarber makes Texas come alive in a way that few authors could.” – Christie Spurlock,  San Francisco Book Review

“… Ann Weisgarber spins a story of two women who are more alike than they’d ever admit, and the reasons they eventually learn of that truth. That’s cause enough to become totally captivated by this novel, but what struck me most was the way in which this story is told: Weisgarber deftly turns the clock back 115 years, immersing readers in social mores, turn-of-the-last-century life, and tiny details of day-to-day survival. That, plus wonderful characters, makes this book a winner.” – Terri Schlichenmeyer, Naples Daily News

“… is a gripping, tautly woven story of love, loss, pain and struggle.  It is a fascinating hodgepodge of churning emotions and grace (or lack of it) under pressure.  It leads readers to wonder if in the wake of nature’s supreme power and devastation, any of the characters will ever be what they once were. – Judi Sauerbery, Bookbrowse.com

“A gripping, beautiful story of loyalties and hidden love.  Ann Weisgarber’s pitch-perfect characters will break your heart and keep you guessing right to the very end.” – Carol Rifka Brunt, author of Tell the Wolves I’m Home

“Weisgarber’s conjuring of Galveston Island at the turn of the 20th century is miraculous–a sensory feast.  Narrated by a pair of compellingly divergent female voices, The Promise is at once an American story of second chances, an achingly felt love triangle, and a psychological tour de force.  I am stunned.  Rarely do novelists so happily marry depth of insight to unflagging suspense.” – Lin Enger, author of Undiscovered Country

“The Promise is a thrilling and heartbreaking novel. Told in alternating voices, with perfect pitch, it brings the past alive with a vivid sense of place and time. This is a story of the enduring bonds between people, of shame and redemption, of promises kept. No one has ever dramatized a cataclysmic storm better, the fury and aftermath. It is a novel of the struggle, the work, and the power of love.” – Robert Morgan, author of The Road From Gap Creek

“…The Promise is set against the backdrop of the worst natural disaster of the 20th century in the U.S., but the weather is no match for this story of two women’s love for the same man. The coastal isolation of Galveston shows Weisgarber’s ability to make a place come alive, and the real storm in the book is the demand of family, the hope of love, and the impossibility of reinvention. Fans of A Reliable Wife will find The Promise to be a book they can latch onto.” – Alexi Zentner, author of Touch and The Lobster Kings

“In this superb novel, Ann Weisgarber has created voices so convincing it is as if the dead themselves have arisen to tell their story.  The Promise is a novel that, once started, few readers will be able to put down.” – Ron Rash, author of Nothing Gold Can Stay

“…once again was startled and drawn in completely by this novel most especially by the voices, exactly as I was with Rachel DuPree, a young African-American pioneer, in the previous novel. With careful and deliberate language and plotting, Weisgarber develops her characters through loaded interactions between Catherine and Oscar, Catherine and Nan, and Nan and Oscar, as well as Catherine’s tentative struggle to become a mother to Andre.  You’ll likely find it impossible to tear yourself away from this story for long until you’ve finished.” – Julie Kibler, author of Calling Me Home

“… is a gripping drama, at once personal and macrocosmic, a powerful recreation of the hurricane that devastates Galveston in 1900–and the fragile but hopeful life that a young woman is rebuilding there after fleeing from a scandalous past. I was captivated by Weisgarber’s deft use of voices, her careful delineation of character, and her ability to pull the reader into a different time and place.” – Chitra Divakaruni, Author of Mistress of Spices and Oleander Girl

“In The Promise, Ann Weisgarber has written a graceful and powerful novel about the redeeming strength of love and the struggle to survive against the forces of nature.  She’s a great storyteller.  We need more writers like her.” – Thomas Cobb, author of With Blood in Their Eyes and Crazy Heart

“…takes a historical premise, The Galveston Hurricane of 1900, but makes the story of two women and the way they try to live and love in a hard hard world as affecting and evocative as any storm.” – Susan Straight, author of Between Heaven and Hell

“Richly descriptive and exceptionally powerful, the novel is a triumph of intelligent storytelling and understated emotion, and confirms the author as one of the most compelling literary voices around.” – Pam Norfolk, Lancashire Evening Post

“…delivers a heartbreaking story of love, loss, and buried secrets…It is an emotional and moving story and we will admit that while reading, we shed a tear or two!” – Galway Now

THE PROMISE is a terrific second novel from Ann Weisgarber. In her clear no-nonsense prose she tells a terrific story of love lost and found, secrets, jealousy and rivalry with the build-up, and subsequent arrival of, the great storm providing a spectacular backdrop. – Irene Haynes, BookGroup.Info

“The characters in The Promise are developed so well, they grow with the story – their failings are not glossed over, these are real people, drawn beautifully. The sense of place is what stands out the most for me…Ann Weisgarber has proved to me that she is an incredibly talented author whose stories are going from strength to strength.” – Anne Cater, Random Things Through My Mailbox

“I highly recommend The Promise. It is a well-written novel and makes an easy yet challenging reading. I read the second half in one sitting, unable to put the book down even to take a sip of water. I fell in love with the characters, but also with the Southern setting: the beach and the references to Cajun society…” – Elena Adler, Books and Reviews

“This is a book you feel and experience rather than read.  The growing affection between Caroline and both Oscar and Andre gave me an almost physical ache – this is a book that portrays and evokes strong emotions while focusing on the little things of life, and I found it quite mesmerising. By the end of the book I felt I’d been through an emotional wringer and fought the storm myself – but I loved every moment.” Anne Williams, Being Anne Reading.

“This is a compelling read peopled with characters who will engage the reader…A powerful, moving story which is sure to garner even more fans for this talented author.” – Teresa, Lovely Treez Reads

“There is so much to enjoy and admire in Ann Weisgarber’s novel …This is a fine book, understated and sure in dialogue and idiom, spare but telling in its details, powerful in its emotional acuity.”- Karen Howlett, CornflowerBooks

“…the hurricane stole my attention.  It is a character in its right…So that we don’t forget important events of the past – no matter how localised – it is important that novels like this are written…Well done to Ann Weisgarber for finding such a unique angle for her story.” -Kelly Selby-Jones, Orange Pekoe Reviews

“The Promise is beautifully written, and its characters are well-drawn… …Weisgarber has researched the time period and the storm thoroughly, although the novel wears its research lightly. The author also describes the surroundings and the weather with precision and elegance… it is a worthy and enjoyable read.” – Historical Novel Society