The Inspiration for The Promise

When I finished my first novel, The Personal History of Rachel DuPree, I signed on to write a monthly article for The Islander, a Galveston-based magazine.  The focus of these articles was unusual or quirky businesses, and in Galveston, the options were nearly endless.  Each month, I zeroed in on something that was of particular interest to me and set up interviews so I could get an inside look at a particular business or job.  Among others, I talked to the owner of a fishing pier, the Chief of the Beach Patrol, and the man who owned a wedding chapel.  But it was an interview with a brother and sister on the west end of the island that eventually inspired me to write The Promise. 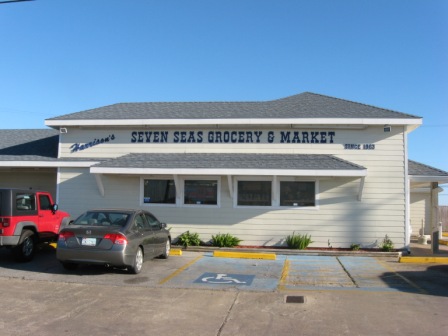 The brother, Tommy Harrison, owns Harrison’s Seven Seas Grocery, and his sister, Peggy McDermott, helps manage it.  It’s the only grocery on the west end, which during 1900 was called ‘down the island.”  Today, there are a mix of beach home communities, campgrounds, acres of undeveloped wetlands, and small cattle ranches.  Seven Seas’ customers are weekenders, tourists, and the few locals who live year round in the area.  More times than I can count, the store has saved me from making the fifteen-mile run into Galveston for a bottle of milk.  Although the grocery is small, it’s well stocked with everything from fishing lures to pricey wines.  In the summer, customers jam the narrow aisles but in the winter, everyone seems to disappear.

In 1963, Tommy Harrison and Peggy McDermott were teenagers when their parents bought Seven Seas.  “There wasn’t much here back then,” Harrison told me. Just a scattering of houses and a liquor store.  The initial years were lean.  “We nearly starved to death,” Harrison said.  It was so isolated that “you could shoot a shotgun down the road and not hit a thing.”  McDermott said, “I thought we had moved to the ends of the earth.  I was devastated.”  She added that there were more rattlesnakes than children.

Ends of the earth.  Rattlesnakes.  I underlined the words in my notes.

Electrical outages were common, and the water wasn’t safe to drink.  Cold drinks and refrigerated food were sold out of ice chests.  Customers bought beer, sat on the front porch, and visited.  “Grocery suppliers refused to deliver to us,” Harrison said.  “We were too far out of town.”  Even the bread man wouldn’t make the drive.  Harrison and McDermott were responsible for driving into the city of Galveston for milk, meat, and other items needed to stock the grocery.  They also filled up bottles of water at a Galveston public fountain and hauled them home for the family’s use.

Too far out of town.  This was another phrase that stayed in my mind.

Although McDermott attended school in Galveston, she hinted that students from the west end didn’t have much in common with those from the city.  Distance and her duties at Seven Seas made it a challenge to participate in extracurricular school activities.  “I used to drive the beach at night, listening to the radio,” she said.  The few teenagers who did live on the west end built bonfires on the beach and held dances.

Dances.  On the beach.

Harrison and McDermott told stories about the old-timers who lived on the west end.  They were fishermen, ranchers, dairy farmers, and their families.  Most of them had little desire to live in a city, even one as small as Galveston.  They were proud of their rural Texas roots and although they were fiercely independent, they helped one another during times of adversity.  These islanders were especially proud of their ability to rebuild after hurricanes.

The interview ended, I wrote the article but I couldn’t stop thinking about “ends of the earth,” “rattlesnakes,” and “dances.”  Like many who live along or near the Texas Gulf Coast, I was fascinated by the 1900 Storm, the worst U.S. natural disaster of the 20th Century.  If Galveston’s west end was isolated in 1963, what was it like during 1900?  Did people live there then?  If so, who were they?  Did they survive the storm?

I read every non-fiction book about the storm that I could find.  To my disappointment, none mentioned people who lived outside of the city limits.  St. Mary’s Orphan Asylum was down the beach and the disappearance of the buildings and the tragic deaths of the nuns and the children are still a part of the 1900 Storm lore.  But was St. Mary’s completely alone without neighbors?

My question took me to the Galveston and Texas History Center at Galveston’s Rosenberg Library.  With the help of the archivists, I eventually found names of people who lived outside of the city.  They were fishermen, ranchers, and dairy farmers.  The facts were bare and sparse, but combined with the interview with Tommy Harrison and Peggy McDermott, that was enough to trigger my imagination.

The Promise is my tribute to the women, men, and children who lived down the island on September 8, 1900.