From Liverpool to Galveston

Galveston, Texas. Liverpool, England. Although both are seaport cities, very little seems to link the two. Once a major port, Galveston is a small island town that depends on tourism. Liverpool is one of England’s largest cities with a diverse economy. But on September 8, 1900, the day a hurricane killed thousands in Galveston, the British steamship, the SS Kendal Castle, was there.  Her captain, Edwin Goudge, age thirty-six and born in London, had sailed from Liverpool. 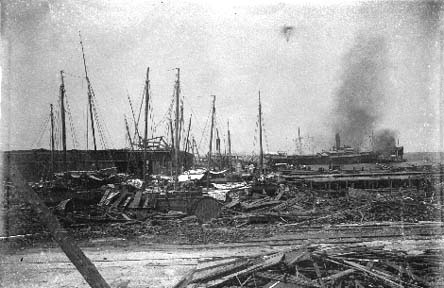 Wharf Front with Steamer Aground in Distance

The day before the storm, officials at Galveston’s U.S. Weather Bureau raised a warning flag. Reports from Cuba indicated a disturbance swirled in the Gulf of Mexico, but most Galvestonians ignored the warning. They were used to storms and high tides that flooded the streets. Their houses were on brick pilings, and since it had been fourteen years since the last hurricane, they assumed the best. A storm could mean heavy rains and strong winds, they told themselves. Inconveniences, yes. But that was all.

Edwin Goudge might have thought otherwise. As captain of a large cargo vessel, it was his job to read the weather. Moored on the bay side of Galveston, he would have noticed the round, dark-rimmed clouds, the brisk wind, and the heavy swells. He probably kept an eye on the ship’s barometer. He might have conferred with the other British captains whose ships — the Comino, Roma, Norna, Benedict and Red Cross – were at Galveston’s wharves. Three other British ships — the Taunton, Mexican, and the ironically named Hilarious – were in port but were still moored or anchored offshore close to Galveston’s quarantine station.

That night, the tide at the wharves rose. By eight o’clock on the morning of September 8, many of the captains were busy preparing their ships. First Mate W. Ledden of the Comino noted in his log that the barometer had fallen and the crew continued to prepare for a storm. Near the quarantine station, Captain W. R. Page of the Taunton instructed his crew to work the engines to counteract the strong current that strained its anchors.

If only Galvestonians had taken precautions. Instead, men went to work, women managed their households, and children and tourists rode the trolleys to the beach to watch waves destroy the bathhouses.

By mid-afternoon, the mood changed. The wind had picked up and the cold rain was needle sharp. Homes near the gulf began to flood, even those on brick pilings. Battered by the wind, women and men carried their children through waist-deep, fast-moving water in search of safe shelter. At 3:00 p.m., First Mate Ledden wrote that “all manner of wreckage” bombarded the Comino. By seven o’clock, wind gusts were estimated to be up to 120 mph. Without warning, the tide surged and Galveston was suddenly submerged in 8 to 15 feet of water. Houses collapsed; people were flung into the water.

At the wharves, the Roma’s stern mooring post broke and her anchor chains snapped. As if it were a child’s toy, the wind and water carried the Roma broadside along the wharves. It slammed into Captain Goudge’s Kendal Castle, then tore through three railroad bridges that linked Galveston to the mainland.

The blow ripped Kendal Castle’s mooring lines. Goudge and his crew must have been frantic as they worked to secure the anchor chains. All at once, a second ship plowed into the Kendal Castle and broke the chains. Within minutes, Goudge’s ship was sent across Pelican Island, then careened into a lighthouse, and blew another ten miles until it came to a stop in marshy water near the mainland.

The storm raged until midnight. During the early morning hours, the wind still gusting and the waves high, Captain Goudge lowered the lifeboats. In the dark, his crew rescued people who had been swept from their homes and into the bay. 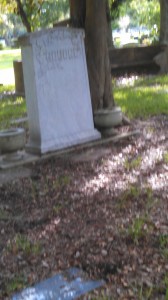 The storm killed at least 6,000 in Galveston and destroyed hundreds of homes. Of the eight British ships, only the Comino and Norna stayed in their berths but they were extensively damaged.

Goudge and his men joined the relief effort and erected tents for the homeless and distributed the ship’s food supplies to those in need. When Clara Barton arrived in Galveston, Goudge volunteered his services to the Red Cross. At Barton’s request, he ferried supplies from Houston to Galveston.

He eventually sailed home to Liverpool but he must have felt a deep bond with Galveston. In September 1902, exactly two years after the storm, he returned with his wife Marion Agatha and their two children. He managed a stevedore company, founded E. Goudge & Son, had three more children, and became an American citizen.

Captain Edwin Goudge lived in Galveston until his death in June 1942. A survivor of the 1900 Storm, his contributions to the relief effort helped rebuild a small island city.