The House Behind the Promise 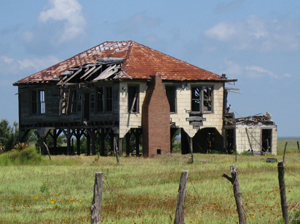 The House That Refuses to Give Up

While I wrote my first novel, The Personal History of Rachel DuPree, pictures of a cookstove inside a sod dugout kept me anchored to the story. Every time I faced the blank screen or wandered off track with irrelevant subplots, the cookstove reminded me that the story was about the narrator’s constant duty to take care of her family. When the book was published, I put the pictures away. A few months later, I ignored a No Trespassing sign, climbed a fence, walked through scrubby pasture land, and took pictures of a small dilapidated house on the rural end of Galveston Island, Texas. I was ready to start a new novel, and I needed this house. It was my anchor for The Promise.

The house is located “down the island,” what we today call the west end. It’s on top of stilts, has a red brick chimney, and is in the middle of a pasture where cattle graze. An old wooden holding pen for cows is nearby. The house faces the beach which is about a half mile away. The back pasture stretches to the bay, about a mile off. I’ve been told that the house was built during the 1920’s by a well-to-do family from Galveston that used it as hunting retreat. That was during better days, though. It’s been vacant for decades, the windows blew out long ago, much of the roof has collapsed, and the front door and deck are missing. It takes a ladder to access it since there aren’t any steps. 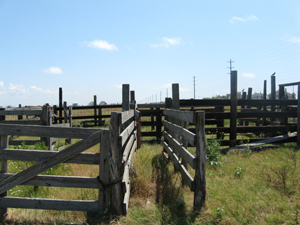 Well before I thought about writing a novel, I became fascinated with the house when my husband and I stayed at a campground that bordered the pasture. At that time, on the weekends, an older man showed up in the pasture and drove around the crumbling house in his Mercedes Benz with a rifle poked out the window. Occasionally he’d stop, take aim at a bird, shoot, and then continue to circle around the pasture. I’m not a hunter, and it was unsettling to camp so close to hunting grounds. It was also unsettling for the cows. But the man owned the house and acreage, and the entire scenario was characteristically Galveston: the expensive foreign car, a man who was determined to do as he pleased on his own land, cows, a beach, and a deteriorating house as witness.

Later, when he died, the heirs developed most of the land for expensive bay homes. To my joy, they kept the house, the holding pens, and surrounding pasture. It may be an eyesore to some, but I admire that house. It refuses to collapse. I was sure that our most recent hurricane, Ike, would reduce it to a pile of rubble. But it held and as I wrote The Promise, I felt a pressing need to tell a story about the people who once lived down the island.

In my mind’s eye, Oscar Williams, a central character in The Promise, owns this house. It and the pasture that stretches to the bay represent his success as a self-made man. Catherine, his wife, is the outsider, the “foreigner,” who attended college and once played only the best pianos. Nan, a neighbor, is the character who needs breathing room, yet cannot imagine leaving her end of the island. Oscar’s son, Andre, will use what his father started and make it his own.

And the house itself, battered but still standing? It’s the spirit of the people of Galveston who no matter what nature throws their way, refuse to give up.