The Promise Walking and Driving Tour 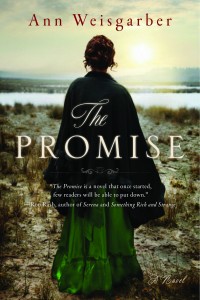 As you tour Galveston, keep in mind that in 1900, the East End and Downtown Districts were approximately 1st Street through 25th Street.  The area between 25th Street and 40th Street was generally called the West End.  Anything past 40th was typically referred to as down the island.

To follow Catherine’s path through Galveston, begin at the train station, now known as the Shearn Moody Plaza and/or the Galveston Railroad Museum.  Although renovations and additions changed the appearance of the station, Catherine was met here by Oscar on August 29, 1900, just ten days before the storm.   Address:  123 Rosenberg Avenue (also called 25th Street) and The Strand.

In Chapter Two, after meeting Catherine at the station, Oscar showed her the sights.  To follow their walk, leave the Rosenberg Avenue entrance of the Galveston Railroad Museum and cross the street to The Stand.  Oscar pointed out the Hutchings-Sealy Building.  The style is classical revival and was designed by Nicholas J. Clayton.  It was built in 1895-1896, about five years before the storm.  It is one of the first steel-constructed buildings in Texas.  The corner half of the building was a bank and the other half housed the Sealy offices.  It was bought by Cynthia and George Mitchell in 1985 and renovated in 1987.  Address:  2326-2328 The Strand.

As you walk along The Strand, look toward the harbor and imagine ships from England, Sweden, Norway, and Cuba anchored there.  Notice, too, the tall doors on the buildings.  In 1900, these were kept open during warm weather for air circulation.

Turn right onto 22nd Street.  Continue to Mechanic Street (also known as Ship’s Mechanic Row) and turn right onto Mechanic.  Catherine saw The Washington Hotel and worried about having enough money to cover her stay.  She was relieved when she and Oscar walked past it.  Prior to 1900, there were several versions of The Washington Hotel but the one Catherine saw was built 1871.  It was partially destroyed by fire during Hurricane Alicia in 1983.  Cynthia and George Mitchell had bought the property prior to the fire and used the original plans to rebuild.  The style is Galveston Greek Revival.  Address:  2222-2228 Mechanic Street.

Continue on Mechanic Street to 24th Street.  (Back toward the railroad station.)  Turn left onto 24th and walk one block to Market Street.  The Central Hotel, where Catherine and Oscar stayed on their wedding night, is a white clapboard building that now houses apartments.   It was built in 1870 and was similar in shape to many of Galveston’s commercial buildings in the 1840s and 1850s.  Address:  2401 Market Street.

In Chapter Four, Catherine and Oscar walked to City Hall to get their wedding license and then to the courthouse for their wedding.  To walk with them from the Central Hotel, walk east on Market Street.  (Away from the train station.)  Turn left onto 20th Street.  City Hall was located on 20th Street midway between Market and Mechanic Streets.  Old City Hall was damaged during the 1900 Storm and the clock tower and third floor had to be removed.  The building was demolished in 1966.

Onward to the courthouse for the wedding, from 20th Street, return to Market Street and turn right onto Market.  Walk one block and turn left onto 21st Street.  Walk three blocks to Central Park which was landscaped in 1873-74.  The courthouse borders the park.  The current courthouse was built in 1966.  The one where Catherine and Oscar were married was at this location and was built in 1899, a year before the storm.  It was demolished in 1966.  Address:  722 21st Street between Winnie and Ball Streets.

Notice the Rosenberg Fountain at Central Park.  It was sculpted by J. Massey Rhind and installed in 1896.  Catherine listened to the splashing water while she and Oscar sat under the shade of a tree soon after their civil wedding ceremony.

In Chapter Four, Oscar suggested they ride the trolley to see the gulf.  There were numerous trolley routes but Oscar and Catherine started at the corner of Winnie and 21st.  At this point, you’ll need your car.  In your car, go east on Winnie, then turn right onto 9th Street.  Cross Broadway and stay on 9th.  In 1900, like today, the houses on the south side of Broadway were less grand than on the north side.   At the seawall, turn right.  The trolley ran a few blocks along the Gulf.

Imagine the beach as it was before the seawall was built and the city raised.   The beach was flat, wide, and had white sand. 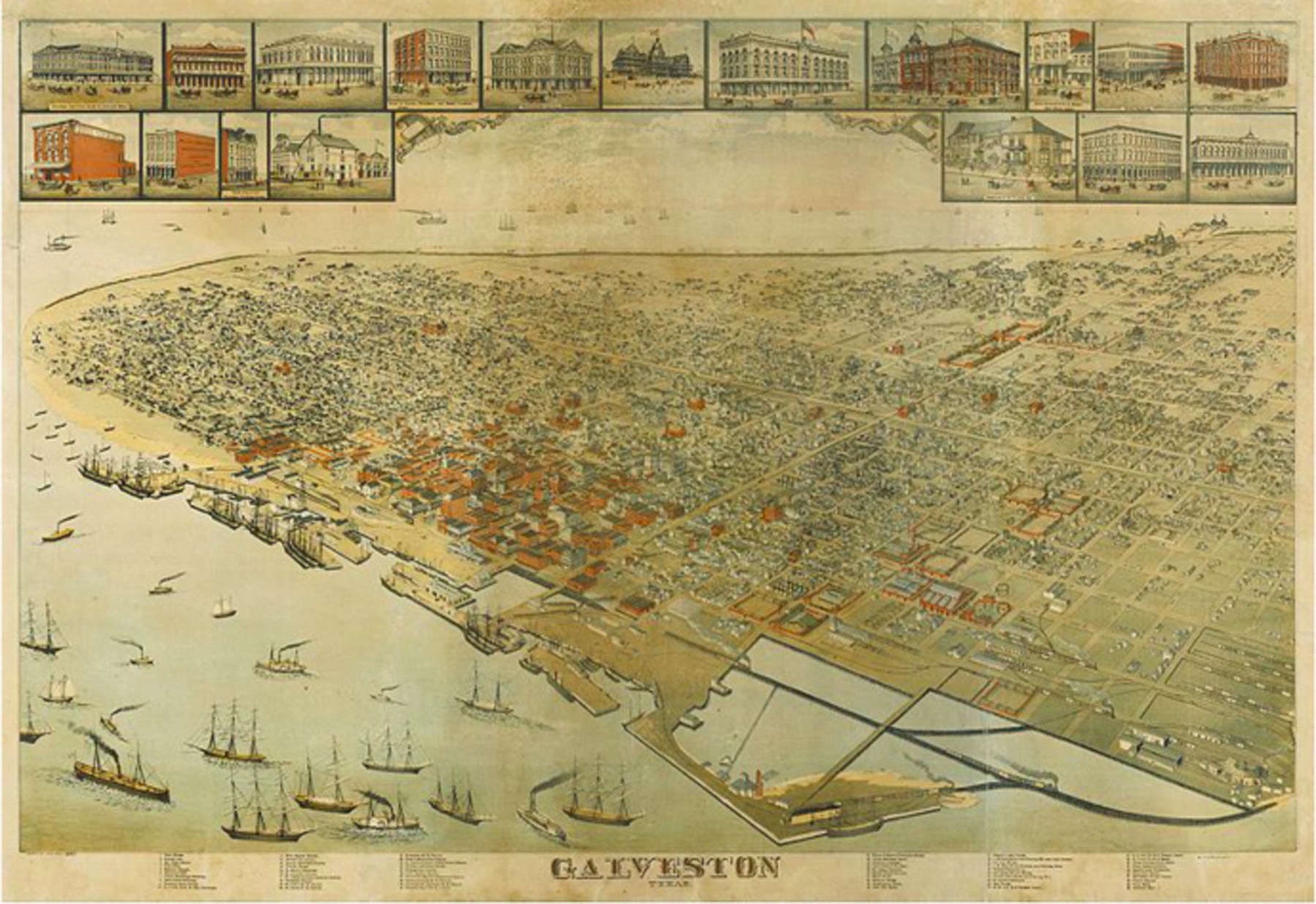 In Chapter Five, Oscar and Catherine leave the Central Hotel at 2401 Market Street and take the beach road to his dairy farm.  To trace their wagon ride, return to the Central Hotel.  Go west on Market one block and turn left onto 25th Street also known as Rosenberg Avenue.  Staying on 25th, cross Broadway by the Texas Heroes Monument and stay straight.  At the seawall, turn right and go west.  Imagine Oscar and Catherine driving the wagon on the beach, the bathhouses behind them and the houses thinning out.

On the gulf side of Seawall Blvd., a plaque honors the memories of the Sisters of Charity and the children who perished when the St. Mary Orphan Asylum collapsed during the storm.  In 1900, the orphanage was about three miles from town.  The plaque is located across the street from Wal-Mart which is at 6702 Seawall Blvd.

Nan’s family lived a little farther down the island but on Offatts Bayou rather than on the gulf side.  To get a feel for Offatts Bayou, go west on Seawall Blvd. to 81st Street.  Turn right onto 81st and follow the signs to Moody Gardens.  Moody Gardens is on the bayou.  If you came to Galveston via 61st Street, you crossed the bayou.  In 1900, this part of the island was not developed.  In The Promise, Nan and her brothers traveled east along the bayou, then cut through Oscar’s back pasture to get to his home on the gulf side.

To get a general sense of how the rural part of the island might have looked in 1900, return to Seawall Blvd via 81st Street.  At the seawall, turn right and drive west on Seawall Blvd. until the seawall runs out.  At this point, the road has several names:  Termini San Luis Pass and FM 3005.  Locals call it Three Double O Five.

In the novel, Oscar’s dairy farm was much closer to town but I based his home on an abandoned house located in a pasture on FM 3005 across from Nate’s West End Bar and Grill.  I don’t know the history of the house but was told it was built in the 1920’s.  It’s on the ridge which runs the length of the island.  When preparing to write The Promise, my husband and I climbed the fence at the old house and took pictures.  I kept them on my bulletin board while writing the book.  Address for Nate’s:  17515 Termini San Luis Pass Road.  It’s just past Jamaica Beach.

In Chapter Nine, Catherine, Oscar, and Andre take the wagon to City Cemetery which was established in 1840-41.  In The Prologue, the mourners for Bernadette also went to the cemetery.  To trace the route, return to Seawall Blvd. close to Wal-Mart.  This part of the island wasn’t developed in 1900 so I’m not sure how Oscar would have taken them to the cemetery.  From Seawall Blvd., I suggest turning left onto 45th Street.  Turn right onto Broadway Avenue toward 40th Street.  Address:  Broadway between 40th and 43th Streets.

Nan’s brother, Wiley Ogden, told Catherine in Chapter Fourteen that he rode out the storm with the Browns at Broadway.  The Brown family lived in Ashton Villa that was built in 1859.  It was the finest house on the island at the time it was built and is an example of the Italianate villa style that was popular in the United States.  Many people took shelter at Ashton Villa during the storm.  On a personal note, my niece’s wedding reception was here.  From City Cemetery, go east on Broadway toward 24th Street.  Address:  2328 Broadway and 24th Street.  It’s on the north side (The Strand side) of Broadway.

For a side trip, you might want to visit Rosenberg Library where I did research in The Galveston and Texas History Center.  It’s a block behind Ashton Villa.  The library was built in 1904, four years after the storm and is the oldest public library in Texas still operating in the original building.  A statue of Henry Rosenberg is located at the Tremont Street entrance.  A Rosenberg Fountain, designed by J. Massey Rhind in 1898, is in the park north of the Tremont entrance.  This fountain had originally been located at The Strand and Rosenberg Avenue but was moved to the library in 1995.  From Ashton Villa on Broadway, go north on 24th Street one block to Sealy.  If you want to visit the library and I highly recommend you do, you can park on the street or in the parking lot next to Ashton Villa.  Address:  823 Tremont Street.

This ends our tour.  I hope you enjoyed it.